ProLectin-M - chewable polysaccharide tablet for the early stage of COVID-19.

ProLectin-A - treatment of ARDS as a result of COVID-19.

ProLectin-F - IV treatment of lung-fibrosis as a result of the use of ventilators used for treatment of COVID-19. 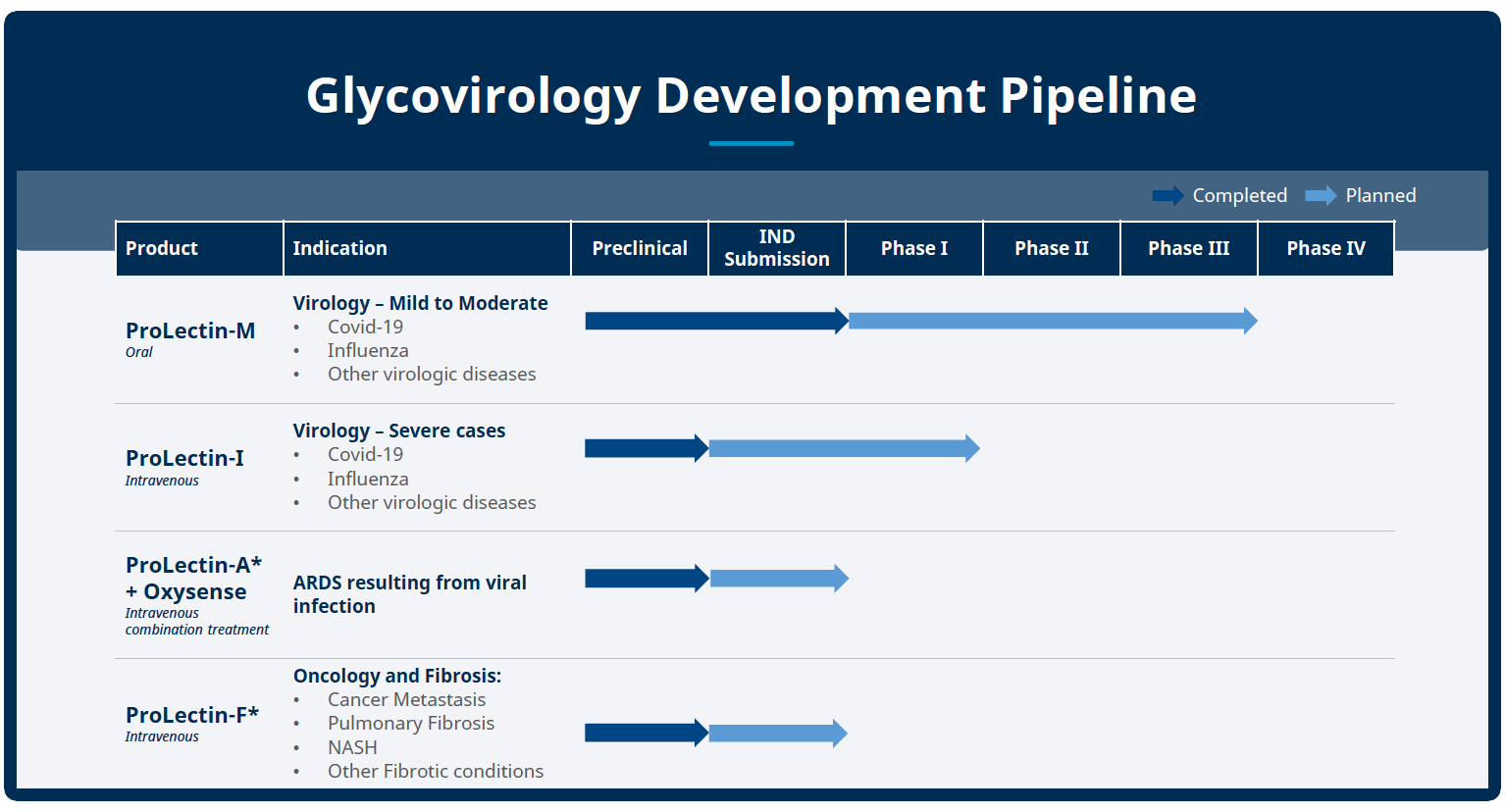 Science behind the product:
‍
Bioxytran has a significant subject matter expertise in the formulation of an oral form of a Galectin inhibitor. The company was able to capitalize on Dr Platt’s many years of research and recent peer reviewed articles on Galectins and COVID-19 to quickly complete the proof of concept phase. Dr Platt, who has a PhD in carbohydrate chemistry, was the first scientist to express the gene, which he named Galectin, 28 years ago.

We know that the N-terminal domain (NTD) of the coronavirus spike protein is similar from genus to genus. On the COVID-19 spike protein scientists have elucidated a galectin fold on the side of the spike that should have a binding affinity to sugar carbohydrates like ProLectin.  Animal studies on influenza (needs reference) have demonstrated that inhibiting galectin-1 improves outcomes in lethal influenza models. Other animal’s models show that galectin inhibitors act as immune modulators in cancer and other diseases.

Our molecule is designed to stay in the blood and attach to the COVID-19 protein spikes. When the inhibitor binds to the spike it effectively tags the virus for elimination through the liver.  Galectins are theorized to participate in the antiviral defense which starts at the initial recognition of the virus before it binds to the entry receptor all the way through the activation and amplification of the innate and adaptive responses of the immune system.

Galectins are adhesion molecules and allow neutrophils to stay prepositioned in the pulmonary capillaries for a quicker reaction in case of infection.  They are also involved in the trafficking of macrophages responsible for the inflammatory cycle of the cytokine storm.  Additionally, research in cancer and viruses has demonstrated that galectins form a plaque on CD-8 T-cells which inhibit the adaptive immune response.  Therefore, our galectin antagonist should not only reduce the viral load of COVID-19, but also modulate the immune response by reducing the trafficking of macrophages thereby reducing the cytokine storm and returning the immune system to homeostasis.  We also expect it to restore functionality to the adaptive immune system by reactivating anergic T-cells that were covered in galectin plaque.

If given early in the disease, we believe that our first drug candidate, galectin antagonist, will block viral entry and tag the virus for elimination through the liver.  In theory the virus will be eliminated from the blood stream after a couple of treatments. At a later stage in the disease pathology, a more potent IV solution, ProLectin- I could restore adaptive immune function to help eradicate the virus from the body.  In severe COVID-19 patients the drug, ProLectin-A, could reduce the trafficking of macrophages responsible for the cytokine storm and restore immune homeostasis. ProLectin-F is designed to treat organ damage after virus is eliminated from the system.

Galectin Antagonist is the first-in-class of inhibitors to cover a range of Galectins associated with viral replication adhesion and immune system blockage (not modulation). The N-terminal domain (NTD) of the coronavirus spike protein is similar from genus to genus. On the COVID-19 spike protein the Galectin fold on the side of the spike has a binding affinity to sugar carbohydrates like Galectin Antagonist.

Galectins are members of a family of proteins called lectins. These proteins interact with carbohydrate sugars located on the surface, in between cells, and on the Galectin fold of the spike protein. These interactions cause the cells to change behavior, including cell movement, multiplication, and other cellular functions. The interactions between lectins and their target carbohydrate sugars occur via a carbohydrate recognition domain (CRD), within the lectins. Galectins have a CRD that binds specifically to sugar molecules. They have a broad range of functions, including regulation of cell survival and adhesion, promotion of cell-to-cell interactions, growth of blood vessels, regulation of the immune response and inflammation. During viral infections Galectins are upregulated and downregulated based on the type of virus. 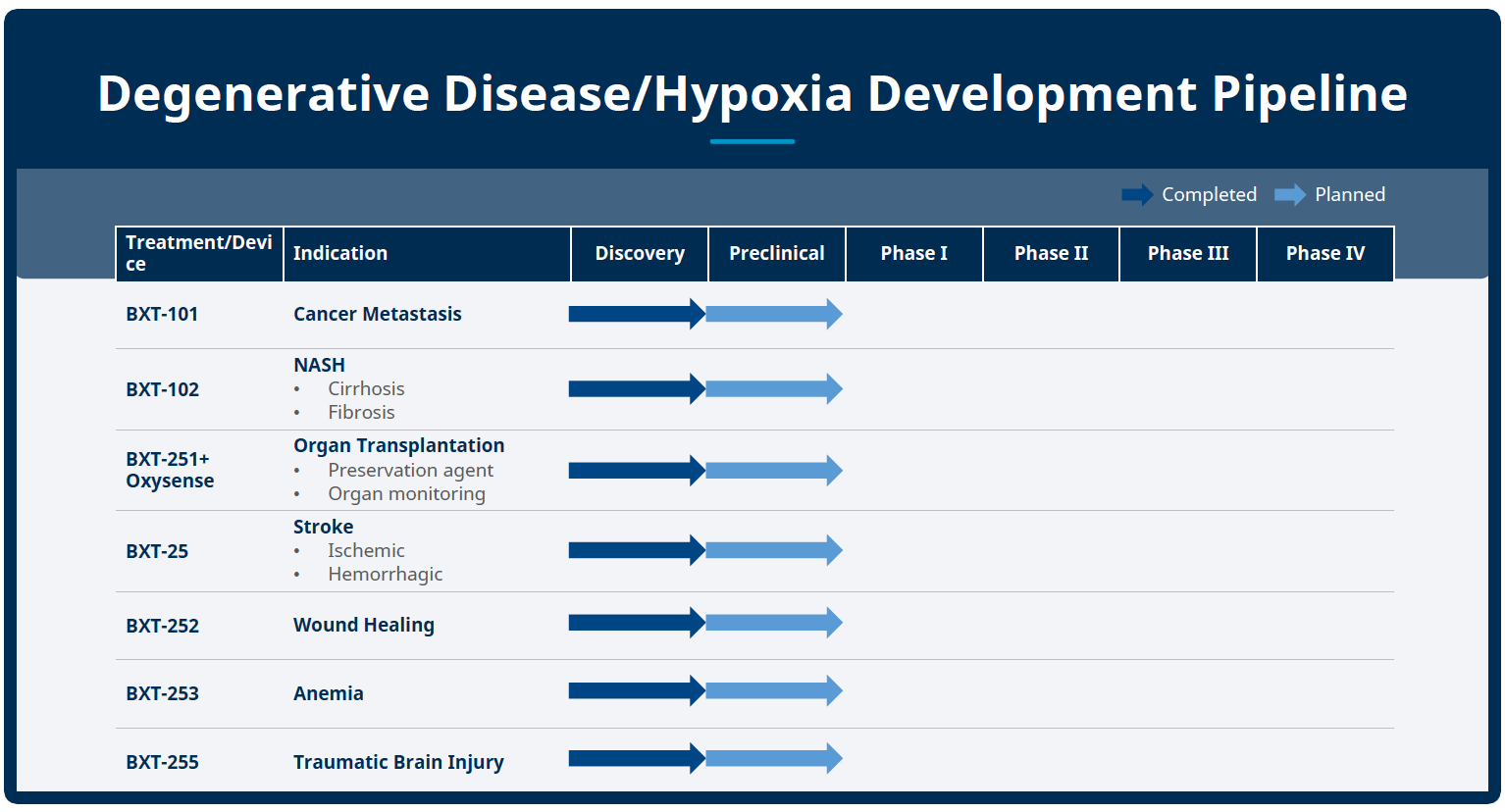 Bioxytran intends to develop and, through third party contracts, manufacture oxygen therapeutics. Our oxygen therapeutics are a new class of pharmaceuticals that are administered intravenously to transport oxygen to the body’s tissues. Currently there are four drug candidates to treat a stroke. Abciximab from Eli Lilly is a platelet aggregation inhibitor. Clinical trials show little advantage over placebos and could lead to dangerous side effects, including more bleeding in patients. Cerovive from AstraZeneca is a Nitrone-based neuro protectant currently in phase III clinical trials which shows no significant benefit over placebos with respect to changes in neurological impairment as measured by the national institute of health stroke scale. Candesartan, from AstraZeneca, is an angiotensin receptor blocker which was used to control blood pressure. Its efficacy in stroke patients still must be proven. Ancod from Knoll Pharmaceuticals is an anti-coagulant that acts by breaking down the fibrinogen. It increases the risk of hemorrhage similar to those associated with tPA. Using our issued patents and proprietary technology, we intend to develop and manufacture BXT-25 and similar drugs for applications including treatment of stroke conditions. Our patent position consists of 2 parts: a patent related to our co-polymer technology issued in 2009 by the United States Patent and Trademark Office expiring in February 2029 (method patent for producing modified pectins consisting of neutral sugar sequences ) and assigned to us outright by David Platt; various methods to stabilize a single hemoglobin molecule that are in the public domain; Dr. Platt did not receive any compensation from the Company in consideration of his assignment of the patent. Additionally, Bioxytran, Inc. has an exclusive license for an FDA approved technology monitoring NADH (OxySense), the control marker in the body’s conversion of Oxygen to Energy, or the energy generating chain. The technology provides a clinical end-point for measuring oxygen supply to the brain in real-time. OxySense, developed by MDX LifeSciences, Inc., provide us with a rapid, cost-effective and validated development of safe new molecules that address unmet medical needs in disease indications resulting from hypoxia. MDX LifeSciences has licensed a patent (Tissue Metabolic Score for Patient Monitoring) to Bioxytran for clinical monitoring of oxygen delivery through oxygen carriers.

If you are interested in participating in our S1 stock offering, fill out the required fields below and we will send you our prospectus and updates regarding BioxyTran Inc.
Thank you. Your submission has been received.
Oops! Something went wrong while submitting the form.

All statements and expressions are the sole opinion of the editor and are subject to change without notice. The Company is not liable for any investment decisions by its readers or subscribers. It is strongly recommended that any purchase or sale decision be discussed with a financial advisor, or a broker-dealer, or a member of any financial regulatory bodies. The information contained herein has been provided as an information service only. The accuracy or completeness of the information is not warranted and is only as reliable as the sources from which it was obtained. Investors are cautioned that they may lose all or a portion of their investment in this or any other company. Information contained herein contains "forward looking statements" within the meaning of Section 27A of the Securities Act of 1933, as amended and Section 21E of the Securities and Exchange Act of 1934, as amended.
Any statements that express or involve discussions with respect to predictions, expectations, beliefs, plans, projections, objectives, goals, assumptions or future events or performance are not statements of historical facts and may be "forward looking statements". Forward looking statements are based on expectations, estimates and projections at the time the statements are made that involve a number of risks and uncertainties which could cause actual results or events to differ materially from those presently anticipated. Forward looking statements may be identified through the use of words such as "expects", "will", "anticipates", "estimates", "believes", or by statements indicating certain actions "may", "could", "should" or "might" occur.
© 2019 BioXyTran Inc.. All Rights Reserved